Infant mental health specialists sometimes work with families that are involved in the legal system. These families may be involved in child protective proceedings, child custody cases or guardianship actions. As a result, IMH professionals are sometimes asked to testify, to provide information or to opine regarding what arrangements for custody, parenting time and services might be most beneficial to the child and the parents. Having basic information about the legal system may help the IMH specialist in effectively advocating for young children and their families.

To maximize effectiveness in advocating for children and families within the legal system, it is important to understand how that system resolves disputes. This is especially true because it is very much at odds with, and foreign to, the way most IMH professionals think about dispute resolution. This point was driven home to me some years ago when I participated as a researcher in a focus group of child welfare caseworkers. One of the workers said this about her involvement in a termination of parental rights case:

“I remember going to court . . . and I felt like I was a piece of meat and the sharks were swimming around me and taking little pieces out of me. And then I remember we had a break and one of the attorneys said, ‘I don’t know why you’re taking this personally.’”

This statement illustrates several important points about our legal system. First, the system is adversarial. That is, it is built on the notion that two (or more) diametrically opposed parties will have an incentive to aggressively seek out and present to the court evidence that supports their claims regarding a particular matter (e.g., termination of a parent’s rights). The system’s philosophy is that through this clash of differing viewpoints the truth will emerge. So, for example, in a child custody dispute where two parents are litigating custody and parenting time (i.e., visitation) arrangements, each will be incentivized to present all the evidence that they can muster that addresses the question of the child’s best interests.

While on the one hand this system provides a mechanism for all the important information regarding the issues in a case to be brought to the court’s attention, on the other hand, it rewards aggressive tactics on the part of the parties, tactics that sometimes feed the dispute rather than move it toward resolution.

The caseworker’s statement also illustrates how participation in legal proceedings may cause a professional to feel personally attacked. Whenever you become a witness in a case, your work will be subjected to adversarial testing, typically through cross-examination. So, your perceptions and the conclusions you draw from them will likely be challenged, and your judgment may be called into question. Also, a witness’s credibility is always an issue in a case. That is, one way to undermine the effectiveness of an individual’s evidence is to undermine that individual’s credibility. Lawyers may attack a witness’s credentials, or try to show that they misperceived something, misunderstood something, have a bias in favor of one party or a prejudice against the other. Obviously, this can feel very personal.

Finally, the lawyer’s response to the worker’s reaction is important to understand. Because this is the design of the system, lawyers are trained that attacks are not personal but, rather, are an essential part of the process of testing the accuracy and credibility of the evidence. As a result, two lawyers may aggressively attack one another’s case all morning in the courtroom and then behave like old friends in the hallway. For those who do not understand that this is the nature of the system, this can feel disorienting.

Another statement from that same series of focus groups mentioned above illustrates a misconceptualization that many mental health professionals harbor about their involvement in the legal system:

“[I]t makes it very difficult for a person to feel like they’re a professional when they’re going in an making professional recommendations and then are shot down by other people who are supposed to be part of the team.”   (Emphasis added)

To understand who is on your “team,” it is important to know two things about the case you are involved in. First, what type of proceeding is it? Typically, in a child custody case there are two parties, the mother and the father. They may be represented by lawyers. On relatively rare occasions the child will have a representative, either a lawyer-guardian ad litem (a lawyer appointed by the court to represent the child’s best interests) or a guardian ad litem (who may or may not be a lawyer and who, in essence, works for the court in trying to determine the child’s best interests).

Unlike a custody case, the child is a party to a child protective proceeding and must have a court appointed lawyer-guardian ad litem. Also, the Department of Health and Human Services is usually the petitioner seeking the court’s protection for the child. Thus, there will always be at least three, and possibly more, lawyers involved in child protection cases.

The second important thing to know is which party is asking you to participate in the case? You will be identified with the party that asks you to be involved in the case. Because the legal system is adversarial, one or two of the lawyers involved in the case will typically not like what you have to say and will, therefore, have an incentive to attack your work.

A third important point is that the judge is not on your “team.” Indeed, the judge should be on nobody’s team. To carry on with the sports analogy, the judge is the referee. We expect referees to be neutral and not to favor one team over the other. 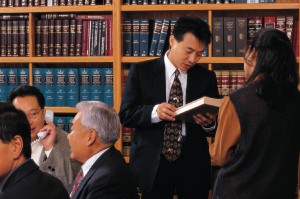 Some people think that lawyers have no ethics. They do. It is just that their ethics are very different than other professions’ ethics. Lawyers’ ethics are tailor-made for an adversarial legal system.[1]

First, a lawyer has a duty of loyalty to a single client. That is, when representing an adult, the lawyer must seek to achieve the goals set by the client, assuming those goals are legal. For instance, if a parent wants full legal custody of her child or wants his child returned to him from the foster care system, those are certainly legitimate goals. When the lawyer takes on the representation of the client, she is duty-bound to achieve the goal(s) set by the client—even if the lawyer may personally have reservations about the wisdom of that result.

To achieve the client’s goal, the lawyer must be a zealous advocate for the client. To understand this ethical obligation of the lawyer, consider some synonyms of “zealous.” Among them are: fervent, fanatical, impassioned, and vigorous. Here, then, you can begin to see the roots of some of the aggressive, even offensive, behavior that lawyers may engage in.

Because a lawyer must act only on behalf of her client, the lawyer may not be open with information or transparent about her motives. For instance, while a lawyer cannot lie to the court or to other parties, the lawyer is under no obligation to disclose everything she knows about a situation. Thus, lawyers will use information strategically and tactically, and do not necessarily value openness in the sharing of information.

Understanding something about the nature of the legal system and legal ethics may help the IMH specialist to be less stressed when called upon to assist the court in determining how to proceed in a case and may help you to be a more effective advocate for the children and families you work with.

Frank Vandervort is Clinical Assistant Professor of Law at the University of Michigan Law School where he teaches in the Child Advocacy Law Clinic and co-founded the Juvenile Justice Clinic. He currently serves as the President of the Board of Directors of the American Professional Society on the Abuse of Children. He is a member of the Editorial Board of the Journal of Forensic Social Work and a peer reviewer for the journal Child Maltreatment. Mr. Vandervort is the author of numerous book chapters, articles and is a co-author of Seeking Justice in Child Sexual Abuse: Shifting Burdens and Sharing Responsibilities. He has fought for the needs of infants and families in the child welfare system for more than two decades as a lawyer, teacher, policy analyst, activist and advocate. He has worked to integrate Infant Mental Health principals and services into courtrooms, classrooms, conversation and policy. Mr. Vandervort works tirelessly to prevent the death of infants by abuse and neglect through advocacy for accurate, early assessment and effective and immediate intervention within the child welfare system.
Posts by Frank Vandervort, JD, University of Michigan Clinical Professor of Law →