Mothers’ and fathers’ engagement and support for young children after they experience distress teaches young children valuable skills in coping with negative emotions (Eisenberg, Cumberland, & Spinrad, 1998). This process is particularly critical in early childhood when these skills are emerging and in low-income, high stress populations (Raver, 2004).  Although dyadic (parent-child) regulation processes have been well studied, less is known about emotion socialization in the context of triads (mothers, fathers, and children) in this population. Among older children and their families, as well as among wealthier counterparts, research shows that characteristics such as family stress and parents’ psychopathology are related to how mothers and fathers support their children’s expression and management of negative emotions (Nelson, O’Brien, Blankson, Calkins, & Keane, 2009). In our work, we are investigating if triadic engagement (mother, father, and child) after stressful events is a context for family emotion socialization.  In short, we are interested in how joint interactions between family members serve as a context for children’s learning about emotions.  We expect that parents’ psychopathology and family stress will impact the quality of these family interactions.

In the current study, we explore the following research question: What factors in parental reports of their own mental health, as well as in their perceptions of their children and families’, predict their capacity to engage with their young children following a stressor? We are particularly interested in how parents provide emotional support to their 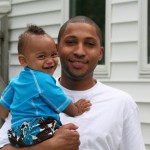 young children after a stressful experience, especially when in the presence of another parent, and the ways in which “repairs” are made in interactions (such as when a disruption in the interaction occurs if a parent misinterprets a child’s cue).  Such supports and repairs are thought to promote children’s early emotional development, though this idea has not been investigated in the context of triads.

The current study describes data collected in a broader, ongoing study (Toddlers’ Emotional Development in Young Families; TEDY; PI: Bocknek) from urban families (89% African American) recruited from WIC centers. Two-year-old children (M=26.73 months), their biological mothers, and secondary caregivers (67% biological fathers) enrolled. Eighty-three percent of families reported annual incomes of $20,000 or less, and 16% were married. Both parents reported on child behavior, family functioning, and psychopathology. In addition, the families participated in a set of observed interaction tasks. The current study includes only those families in which the biological father participated (N=45) and describes data coded during a structured play task where mother-father-child triads reunited after a short separation and blew bubbles together for three minutes.

Behaviors were coded using a microsocial coding system that captured the occurrence of social bids and responses among children and parents [e.g., child vocalizing to parent and parent responding in a meaningful way; parent giving a direction and child promptly following the direction].  The duration of engagement among family members was also coded.  Specifically, the percent of time all three members of the triad were actively engaged (e.g., harmoniously interacting in a joint activity) with each other was assessed. Results suggested that families were relatively engaged most of the time (i.e., on average, families were engaged for 50.79% of the task). Indicators of engagement included reciprocal discussion, physical orientation toward each other, reciprocal activity involvement, and showing interest in what the other family members are doing (interrater reliability: k=.75). In addition, mothers as well as fathers self-reported on a set of questions pertaining to their own mental health, their perceptions of their children’s behavior, and their family dynamics. In the current study, we present data from parent reports of their own posttraumatic stress disorder (PTSD) and depression symptoms, as well as their assessment of their child’s temperament, their co-parenting relationship, and chaos in the family/home environment.

Predictors of the Quality of Triadic (Family) Engagement

Child behavior. Fathers’ (but not mothers’) reports of children’s inhibitory control (an early form of self-regulation related to temperament style) was associated with family engagement.

These results suggest that families may be less likely to be engaged with each other following stress when mothers have higher PTSD symptoms, or when fathers perceive child or family disorganization. The research literature describes mixed findings as to whether or not PTSD symptoms impact parenting, though depression is typically a more consistent predictor of low parenting quality (Muzik, Bocknek, Richardson, Rosenblum, Thelen, & Seng, 2015). However, in the current sample, maternal PTSD emerged as a significant predictor of family engagement while depression did not. Because we measured engagement following a stressful event, the likelihood of transient PTSD symptoms being triggered was heightened. Appleyard and Osofsky (2003) have argued that parental PTSD may be associated with less sensitive parenting when parents are preoccupied with, and struggling to regulate, their own reactions to the stressful event. Our findings point to the primary role that mothers may play in reorganizing their families after occurrence of stress. Furthermore, these findings emphasize that mothers’ psychopathology is a significant risk factor for the family.

Fathers’ perceptions of their children and their homes were also significant predictors of the degree to which families positively re-engaged after the stressor task. From a theoretical perspective, scholars highlight the critical role that perception plays in helping families adapt to stress, such that greater adaptation occurs when family members believe that coping is possible because internal and external environments are predictable (Lavee, McCubbin, & Patterson, 1985). These findings suggest that fathers may play an important role in helping families to positively perceive internal resources to adapt. Furthermore, fathers’ perceptions compared to mothers’ may be more impactful on triadic engagement as function of the higher variability of overall paternal engagement compared to maternal engagement in this population.

This study underscores the need to intervene with mothers and fathers in different ways in multi-stressed families.

Rates of Trauma Exposure Reported by Mothers and Fathers