In this research brief we will present research that explores family factors predicting parents’ negative responses to toddlers’ emotions.  It is important to learn more about mothers’ and fathers’ negative response as we understand that these responses impact the way that children are socialized to understand and express emotion.  Parental emotion socialization practices are thought to be a function of parenting and family processes embedded in the family context1.  We examined (1) parents’ beliefs about when and to what extent children should express emotions2, (2) parents’ handling of their own emotions1,3,4, and (3) the co-parenting relationship5— each of which reflect key processes in the family context that likely influence parents’ socialization practices, particularly how parents respond to toddlers’ expressions of emotions such as anger, fear, and sadness. As defined by Gottman2, parental beliefs about emotion can include dismissing attitudes such that children’s expressions of strong emotions such as anger, sadness or fear are met with anger, sarcasm or shaming. Generally, these types of reactions to children’s emotions are thought to be detrimental to children’s emotional development while more supportive responses are considered more optimal.  Parents’ skills in regulating their own emotions, particularly in front of children, are also powerful emotion socialization agents.  Imagine a parent who models dysregulated anger, such as screaming in anger rather than modeling how to more constructively express anger.  Parents who have difficulties managing their own powerful feelings are more likely to respond to their children’s expressions of emotions in a negative fashion4.  Likewise, the co-parenting relationship can be characterized by hostility and anger that spills over into parenting behaviors6,7.  Triangulation, for example, occurs when one parents pulls the child into parental conflict by forcing the child into an alliance against the other parent.  Examples of triangulation include things like one parent saying negative things about the other parent to the child and degrading the other parent.  Triangulation is very harmful for the child because it places the child  in the impossible circumstance of having to negotiate and deal with conflict between the parents8.  The ways that parents raise the child together is called the co-parenting relationship.  The co-parenting relationship is sometime characterized by very negative processes such as triangulation.

We were interested in how these three socialization contexts– parents’ emotion dismissing beliefs, parents’ dysregulatory problems, and co-parenting—were independently and in interaction related to mothers’ and fathers’ responses to toddlers’ expressions of anger, fear and sadness. 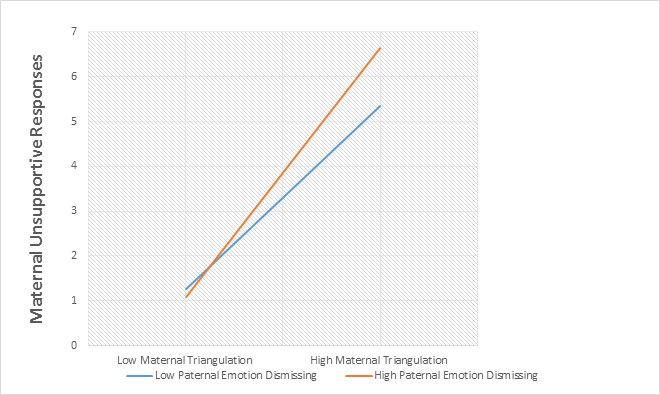 For both mothers and fathers, their own emotion dismissing beliefs and their perceptions of triangulation (such as the other parent was using their child as a pawn or ally in response to a conflictual parenting relationship) were related to unsupportive responses to toddlers’ emotions.  Collectively, this suggests that multiple dimensions of the emotional climate in the home are related to parents’ early emotion socialization behaviors. In our study, negative climate in the home clearly related to parents’ harsh responses to toddlers’ strong emotions. Interestingly, mothers were influenced by fathers’ dismissing beliefs in interaction with their perceptions of triangulation in the co-parenting relationship.  This is somewhat surprising because some of our prior work suggests that fathers tend to be more heavily impacted by mothers’ behaviors than mothers are by fathers13.  It may be that in the earliest years of parenting mothers are particularly sensitive to the dynamics in the parenting relationship.  Towards the end of toddlerhood, parenting tends to fall into relatively stable patterns.  Prior to that point, however, parenting behaviors may be more vulnerable to the evolving dynamics as a couple transitions to parenthood. In summary, results underscore the strong influence of the co-parenting relationship and beliefs about emotions for both mothers and fathers, but also highlight the ways in which complex interactions differentially influence the socialization practices of mothers and fathers.  Home visitors can play an important role in educating parents about findings like this and helping parents navigate the early family environment.14