The mother-baby dyad is a beautiful yet vulnerable miracle of humanity that has tremendous potential to shape how infants will grow to view themselves, their relationships and the world. While birth and mothering are joyful events, substance use and addiction can complicate the time surrounding pregnancy and birth with guilt, shame and fear and may disrupt this dyadic process of attachment.1 This article: a) briefly discusses perinatal substance use, with a focus on prenatal opiate exposure and the potentially resulting neonatal abstinence syndrome (NAS), and b) suggests a broad relationship-based approach be embraced by care settings across the perinatal continuum, from inpatient and outpatient clinical areas to community support resources.

Perinatal Substance Use Disorder (PSUD) is a pervasive disease process with far-reaching consequences for women, children, families and communities. Nearly 3 decades ago, maternal crack/cocaine use and the term crack babies led the headlines, with potentially one in ten women between 15 and 30 years of age using cocaine regularly.2  Additionally, Schafer describes, with the behaviors of an infant who is withdrawing from cocaine and a mother who is suffering the addiction, a cycle that is set into motion of “interactional difficulties which would give even the most experienced mother grave problems.”2

More recently, a significant increase in perinatal opiate dependence and addiction has occurred, either through prescribed or illegally obtained painkillers or narcotics. According to the 2015 National Survey on Drug Use & Health, substance use in pregnancy occurs commonly with 5.3% of pregnant women reporting using “any illicit drug,” 4.1% reporting using marijuana, 1.1% reporting using prescription opiates or painkillers, 0.3% reporting using cocaine and 0.2% reporting using heroin, although these self-reports are likely to be underestimates because of the stigma associated with drug use in pregnancy.3 Of all these drug exposures, newborns who are opiate exposed are most likely to have birth complications, withdrawal and lengthy hospital stays. Specifically, these newborns often experience neonatal abstinence syndrome (NAS), which is a grouping of central nervous, respiratory and digestive system responses to drug withdrawal upon the infant’s separation from the mother’s blood supply at birth.4 Symptoms include extreme irritability; poor sleep; tremors; hypertonia and frantic, uncoordinated sucking. The physiologic symptoms of NAS can also include sneezing, emesis, diarrhea, tachypnea, nasal stuffiness and possible seizures.4

The way the professional (doctor, nurse, home visitor, human services worker) treats the mother impacts how she feels about herself and affects her ability to care for her baby.

NAS can appear as quickly as 24 hours after birth with heroin exposure or as late as 72 to 96 hours after birth with opiate, methadone, or buprenorphine exposure.4 With the onset of NAS, infants are treated in the hospital with close monitoring, comfort measures, supportive care and, perhaps most importantly, with pharmacologic therapy such as methadone or morphine. This lengthy, costly and often uncomfortable process of weaning can demand weeks to months of care in the hospital and likely in a neonatal intensive care unit (NICU) or specialized inpatient pediatric care unit.6

With the complexities of drug use and PSUD in new mothers, coupled with the separation and fear associated with the NAS clinical course, it is not surprising that many authors note the potential for insecure attachment and relationship challenges between mothers and their infants.1, 7, 8  Attachment within the maternal-infant dyad can be impacted by multiple factors, such as the mother’s past relationship experiences, the mother’s feelings about being a mom, how the mother was cared for as an infant and the mother’s feelings about her birth experience. Therefore, it is clear that drug use and PSUD are severe risk factors to maternal functioning, infant physical and emotional health and the attachment process.

Women experiencing PSUD have a chronic brain disease that is well supported in the literature, where relapse is common and expected.9 However, McLellan et al. note that successful treatment with PSUD is comparable to, or better than, compliance with treatment plans for other chronic conditions such as hypertension, diabetes and asthma. Pregnancy and birth promote hope and new beginnings; these elements may play a role in better treatment outcomes during pregnancy and the early postpartum period. As such, a mother experiencing PSUD once explained that she wanted a future for her baby that was different from her own reality; additionally, she stated that her motivation for change was greatest in pregnancy and during her child’s infancy. Therefore, the perinatal and newborn period must be leveraged with optimal care and support for those affected by PSUD and NAS. This care should be provided nonjudgmentally, with compassion and empathy. 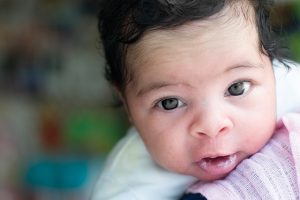 Health professionals are generally in agreement on the need for physical treatment of NAS and addiction treatment for mothers; likewise, social service entities are clear on the need to ensure immediate protection and safety for newborns. However, what is often lacking in the maternal-infant continuum of care from hospital and healthcare settings to community agencies is a common language and paradigm that seeks to initiate an intentional parallel process of relationship-based care provided to the mother, so as to galvanize the mother to connect and optimally care for her baby. Simply stated, the way the professional (doctor, nurse, home visitor, human services worker) treats the mother impacts how she feels about herself and affects her ability to care for her baby. “It is only when a mother’s emotional needs are considered and supported, that she will be able to attend to her infant’s emotional needs.”10 By broadening the infant mental health (IMH) practice framework across care settings and disciplines, as well as throughout transitions of care (ie, from inpatient to home), a consistent approach to relationship-based care could be realized and used to strengthen the recovery capital of the mother.

One example of this type of multidisciplinary approach is in Northern Michigan, where IMH, health department, hospital, human service, intermediate school-based, tribal and foster care/adoption entities have formed to create an IMH Training Consortium. This consortium works to provide staff and supervisors across the region with training opportunities 3 times each year that focus on relationship-based principles and attachment concepts that can be applied from beginner to specialist. Further, hospital and health department nurses, alongside child protection workers and other agency representatives, are learning the impact each professional can have using IMH principles of parallel process, holding and relationship-based care, even in one home visit or an 8-hour hospital shift.

In practice, this IMH-informed approach to care has strengthened the way mothers and infants experiencing NAS are cared for in one local hospital. When a baby who is in the hospital with NAS has been stabilized medically in the NICU, the mother and baby are transferred to a unit with private rooms and rooming-in for parents to care for their infant while being mentored and supported by hospital staff. While the baby is medically managed, nurses and social workers are also intentionally nurturing the mother with education on NAS, support, encouragement and meals. This is an example of parallel process in a hospital setting, and it provides an opportunity to strengthen the relationship within the mother-baby dyad. Furthermore, it has been found that the duration and severity of NAS can be reduced through maternal skin-to-skin contact and breastfeeding.11 By helping the mother learn her baby’s cues and encouraging her to be present as the most important primary caregiver in the hospital, she may begin to see what a difference she can make in her baby’s recovery.

In closing, collaborative, cross-disciplinary IMH informed training and practice frameworks that are steeped in relationship-based principles can benefit mothers and babies affected by PSUD and NAS. The way a mother experiencing PSUD is treated and her view of herself as being a capable (or incapable) mom will impact how her relationship and attachment with her baby develops. Even in a highly clinical hospital or specialized community setting, care providers can benefit from relationship-based education, so as to better encourage and promote mothers’ beliefs that they themselves are their babies’ best and most important medicine.

Betsy has been a Registered Nurse for 23-years, specializing in Maternal-Child Health. Since its inception in 1998, Betsy has coordinated the Healthy Futures program, a primary prevention and universal support community care model offered to all families delivering at Munson Medical Center and partnering hospitals in northern Michigan. She received a RN from Northwestern Michigan College, a BSN from University of Michigan and is currently completing a MSN, specializing in Healthcare Systems Management from Loyola University New Orleans.
Posts by Betsy Hardy, BSN, RN →