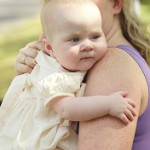 In order to better understand the early intervention experiences of parents who have infants and toddlers with permanent hearing loss, we asked:

We partnered with Early On® to recruit families in order to learn more about their experiences with early intervention for their children who had permanent hearing loss. Criteria for being in the study included the following: (a) children had to be between 12 and 30 months of age, be enrolled in an early intervention program, and have no cognitive delays or additional disabilities, and (b) both of their parents had to use English as their primary language and have typical hearing, since mismatches between parents’ and children’s hearing statuses puts these children at greater risk for delayed language development (Spencer, Erting, & Marschark, 2000; Meadow-Orlans, 1997; Meadow-Orlans & Spencer, 1996). Children could have any degree of hearing loss, and families could be using any form of communication with their children (e.g., signed, spoken or combination of both). To make participation easier for families, only one parent per family was asked to participate in the study. Twelve parent-child dyads who lived throughout the state of Michigan participated. Children’s degree of hearing loss ranged from mild to profound, and most families were using spoken language with their children and supplementing this with the use of signs.

In order to learn about families’ experiences, we conducted home visits which included semi-structured parent interviews. Parents were asked about what they like the most and find most useful about the early intervention services they receive and the service providers with whom they interact, as well as their ideas about ways in which these early intervention services could be improved. Based on these interviews, we searched for themes in parents’ responses related to the research questions stated above.

Parents reported that their early intervention experiences had been primarily positive, mostly due to the supportive relationships they developed with their service providers. Some parents, however, noted areas where their services or experiences should be improved, such as an increase in the amount of services and receiving information that is more specific to their child’s disability. Figure 1 shows the patterns in parents’ interview responses regarding strengths of the early intervention services they and their children receive and aspects of these services they felt should be improved. 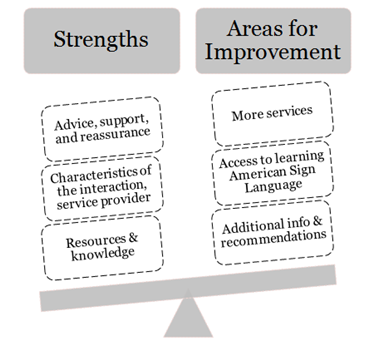 Parents’ satisfaction with their early intervention services was also related to how they personally felt about their service providers. Parents spoke positively about service providers who made them feel reassured and comforted, and with whom they felt could relate well. Other major strengths of their early intervention service providers included patience, openness, and supportiveness. Parents especially appreciated feeling like their service providers genuinely cared about them and their children. For example, one parent said, “They care about what the parents go through, too, in the process. And they care about if it’s difficult or hard; they know that it’s hard and it’s a struggle sometimes. So, the fact that they just are genuinely caring about the whole situation and understanding is the most important thing to me because I don’t get involved with anything if I feel uncomfortable.”

Areas for improvement. While parents were thankful to be working with Early On®, most parents did report areas where they felt their services should be improved. A common theme throughout the interviews included parents’ desire for more of the services they already received; parents wanted more visits from service providers, additional advice and information on what they could be doing to help their child, and new ways to connect with other parents of children with hearing loss. In addition, some parents discussed their desire to work with service providers who are fluent in the use of American Sign Language and who have additional expertise relate to serving children who have hearing loss. For example, one parent who was not receiving support from his service providers to learn American Sign Language said, “I guess if I could change anything, if I could have got assistance from early intervention in terms of learning sign language myself. That was something we totally had to do on our own.” Lastly, while parents were appreciative of receiving advice and reassurance about general parenting issues and questions, some expressed that they would like to receive more information about their child’s hearing loss, as well as detailed information that is specifically relevant to their children’s unique needs because of his/her hearing loss. Some parents said they felt that the advice they received was very general, or applicable to many infants and toddlers instead of being specific to the needs of their child with hearing loss.

Overall, the parents interviewed for this study shared many strengths and positive experiences about their early intervention services and service providers; they reported feeling very satisfied with the services that they receive. Parents appreciate their interactions with their service providers, whom they often described as warm and caring individuals. The primary areas for improvement that parents identified included the need for more visits and services, a desire to work with service providers who are fluent in the use of American Sign Language, and the need for more nuanced, disability-specific information.

Yoshinaga-Itano, C. (2014). Principles and guidelines for early intervention after confirmation that a child is deaf or hard of hearing. Journal of Deaf Studies and Deaf Education, 19, 143-175. doi: 10.1093/deafed/ent043