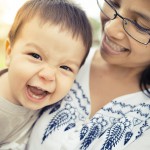 mental health and functioning. However, recent research suggests that emergence of affective and cognitive indicators of empathy are present as early as 8 to 10 months of age (Roth-Hanania, Davidov, & Zahn-Waxler, 2011), emphasizing the significance of the early months in life for the emergence and development of empathy-related behaviors.

The quality of the parent-child relationship has been linked to early expressions of concern for others. Toddlers, who display higher empathy-related behaviors, such as concern for others’ distress, have experienced more contingent and sensitive maternal responsiveness as infants (Spinrad & Stifter, 2006).  Parents scaffold children’s empathy-related behaviors through multiple processes including modeling and social interactions. Parents, who are aware of their children’s sadness and anger and validate their children’s negative emotions, tend to use emotion talk, such as labeling their children’s negative emotions, and to facilitate problem solving. These parents are said to act similar to a coach and are referred to as emotion coaches (Gottman, Fainsilber-Katz & Hooven, 1996).  Conversely, parents who believe sadness and anger are harmful emotions tend to encourage denial and avoidance of such emotions in their children and adopt a somewhat dismissive style in their responsiveness to negative emotions, which may be maladaptive in spite of good intentions.  Parental coping with children’s fear, sadness, and anger include positive strategies such as encouragement of emotional expression, or negative strategies such as punishment and minimization of negative emotions. These parenting behaviors are related to children’s ability to express concern for others in distress and help alleviate others’ pain (Davidov & Grusec, 2006).

Mentalization-related attributes, such as mind-mindedness (i.e., making mind-related comments about infants’ intentions and behaviors) and mental state talk (i.e., using language that describes wishes, thoughts, and feelings including words such as want, need, sad, happy, think, remember) in conversations with children, have been associated with children’s ability to accurately perceive beliefs, intentions, and emotions in others (Meins et al., 2002; Taumoepeau & Ruffman, 2006). Also, children’s own use of mental state language is an essential tool used to understand and share significant experiences with others (Fivush, & Baker-Ward, 2005). Thus, parenting behaviors such as parents’ emotion coaching and their mind-minded and mental state comments are likely related to very young children’s empathy-related behaviors.

In Study 1, we examined the ways in which maternal beliefs about sadness and anger, as well as coping with children’s negative emotions, contribute to preschoolers’ expressions of prosocial behaviors.

In Study 2, we investigated the contributions of maternal emotion coaching beliefs and toddlers’ internal state language to toddlers’ expressions of empathy. This is important, first, because low-income children are at higher risk for poor social-emotional outcomes. Second, limited attention has been given to the study of mental state language in children younger than 3-5 years.

Study 1 was conducted at the Michigan State University Child Development Laboratories. In this study of 37 mothers and preschoolers, (MomAge = a mean of 34 years, SD = 5.77; ChildAge = a mean of 52.6 months, SD= 8.43) we have assessed maternal beliefs about their children’s experience of sadness and anger with the Maternal Emotional Styles Questionnaire (Lagacé-Séguin & Coplan, 2005).  This questionnaire includes subscales that assess emotion coaching beliefs (i.e. the parent encourages and supports the child’s expression of emotions) and emotion dismissing beliefs (i.e. the parent disregards the child’s expressions of emotions). Additionally, we assessed the range of strategies for responding to children’s negative emotions via the Coping with Children’s Negative Emotion Scale (Fabes, Eisenberg, & Bernzweig, 1990).  Coping strategies included focusing with the child on the problem at hand, encouraging the child’s expression of emotion, minimizing the child’s emotions, punishing the child for the expression of negative emotions, and, finally, mothers becoming distressed themselves. Children’s empathy was assessed using the Empathy Questionnaire (Rieffe, Ketelaar, & Wiefferink, 2010) consisting of three subscales related to Emotion Contagion, Attention to Others’ Feelings, and Prosocial Behaviors. Currently, we provide preliminary results focused on maternal emotion beliefs, their emotion coping strategies, and children’s prosocial behaviors.

Study 2 utilized data from a larger social-emotional curriculum development and evaluation study (Brophy-Herb et al., 2005). In this study of 167 mothers and toddlers (MomAge = mean of 27 years, SD = 7.67; ChildAge = mean of 18.69 months, SD = 8.97), we assessed maternal beliefs about their children’s experience of sadness and anger with the Maternal Emotional Styles Questionnaire (Lagacé-Séguin & Coplan, 2005), and the empathy subscale of the Infant-Toddler Social-Emotional Assessment (ITSEA; Carter & Briggs-Gowan, 2000). We also asked mothers to respond to a list of words representing mental state language and tell us which words their toddlers knew and understood.  Specifically, we asked mothers to comment on the total number of cognitive state mental words (e.g. words like think and know) and emotion action words (e.g. words like crying and smiling) the child knew and understood.

Study 1.  Multiple regression analyses showed that maternal emotion coaching beliefs were significantly related to mothers’ emotion-focused reactions to children’s expressions of negative emotions (β = .53, p = .005) and to their problem-focused reactions (β = .70, p = .019). These findings suggest that when mothers believe that sadness and anger are important emotions to validate and process with their children, they are more likely to focus on the emotional content of their children’s challenging daily emotional experiences and, subsequently, act in more emotionally-comforting ways. These parents also facilitate their children’s problem-solving skills as a coping mechanism when expressing strong emotions. Our results further revealed that maternal emotion-dismissive beliefs were significantly related to mothers’ minimizing reactions (β =. 84, p = .000) suggesting that parents who believe negative emotions are harmful tend to minimize their children’s expressions of sadness, fear, and anger by asking their children to ignore their emotional experiences. Comments such as “You’re fine.  Stop crying.” minimize the child’s experience of the emotion.  Consistent with our hypothesis, mothers’ distressed reactions in response to their children’s negative emotions were significantly and negatively associated with children’s prosocial behaviors (β = – 0.25, p = .011).

Study 1 results highlight the important role that parents’ individual beliefs about negative emotions play in their approach to processing children’s negative emotions, which maybe important contributors to children’s capacity to tolerate negative emotions in self and others. Furthermore, our results suggest that a parent’s own capacity to regulate his or her own distress when faced with their children’s intense emotional distress helps to facilitate children’s motivation to help others in distress. A parent who becomes distressed or responds to the child’s negative emotions with anger or anxiety is modeling such emotional responses.  Moreover, the parent is likely missing opportunities to support the child’s development of important regulatory skills that may contribute to building a capacity for empathy and prosocial behaviors.

For more information about this study contact  Neda Senehi at senehine@msu.edu

Neda Senehi is currently working on her PhD in Child Development at Michigan State University
Posts by Neda Senehi, MA →