The following article is reprinted with permission from the author. The article was originally published in The Conversation on September 1, 2016.

Mothers across all cultures may worry about being judged for their child’s appearance. But for African-American mothers, a child’s hairstyle can be especially anxiety-inducing. If they don’t properly care for it, many fear they are violating community norms. So they fashion it to appear less curled and unruly, sometimes even using chemical straightening products on kids as young as 36 months old.

Failure to do so can lead to intense backlash.

In 2014, a Huffington Post headline announced, “Beyoncé responds to Blue Ivy hair drama with a perm.”

The article described the uproar over the decision of singer Beyoncé Knowles and her husband, Jay-Z, to leave their daughter Blue Ivy’s hair in a natural, curly state. Some called the couple negligent for not grooming their daughter’s hair. Others accused them of “cruelty” for leaving her hair “nappy.” A petition even circulated calling Blue Ivy’s hair “disturbing.”

More recently, African-American Olympic gold medalist Gabby Douglas faced a barrage of insults about her hair on social media during the 2016 Olympic Games in Rio. Many complaints focused on her hair looking “unkempt.”

Why is hair such a hot-button issue in the African-American community? And what if hair weren’t a source of tension and shame, but instead served as an opportunity for African-American parents to bond with their kids?

For two decades, these questions have formed the basis of my research. They’re complicated ones – deeply ingrained in negative stereotypes – but I’ve been able to show how a simple daily task can help heal wounds caused by centuries of oppression. 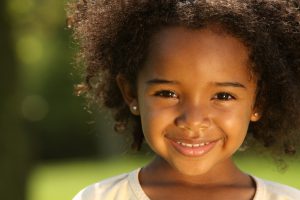 As a direct descendant of enslaved Africans who grew up in an African-American community, I have fond memories of sitting between my mother’s legs as a young child and getting my hair combed. For me, the daily ritual of hair combing was a special mother-daughter bonding time.

But while parents across all cultures comb their children’s hair, my research during graduate school revealed how, for African-American parents, the task is uniquely layered in emotionally charged, negative stereotypes about hair.

The origins of these attitudes are over 400 years old, deeply rooted in the psychological trauma of slavery. Part of the denigration of people deemed “property” meant vilifying all physical characteristics associated with their status, from dark skin color to thick, tightly curled hair – a stark contrast to the straight, thin hair of their oppressors. These debilitating stereotypes were merely one arrow in a quiver of psychological warfare used to subjugate the millions of enslaved men and women who outnumbered their owners.

Yet the negative intergenerational messages about hair still resonate today. Ironically, although these stereotypes about hair were originally perpetrated by whites, negative reactions to African features are also held by many African-Americans.

Psychologists refer to this phenomenonas “internalized oppression,” or identification with the oppressor. A billion-dollar beauty industry that includes straight-haired wigs and skin-bleaching creams speaks to the legacy of this historical trauma.

Mothers who have internalized these historical stereotypes about what constitutes “good” and “bad” hair may express these attitudes in how they interact with their child while combing the child’s hair. For many parent-child relationships, hair remains a flashpoint for conflict and shame.

Flipping a negative into a positive

As a psychologist, I worry about parents who possess these subconscious beliefs about their child’s dark skin color or tightly curled hair – that these beliefs will be expressed in acceptance or rejection of children.

Numerous studies demonstrate that strong, supportive bonds between a parent and child – what’s called secure attachment – are required for infants to grow into healthy adults. This begins with the unconditional acceptance of infants from birth and continues with consistent encouragement and support in the child’s first months and years.

Findings from my research suggest that this simple task, which takes only around 10 minutes per day, facilitates some core parenting behaviors that lead to more secure attachments: positive verbal interaction, loving physical touch and responsive listening. (For example, research has shown just how important healthy physical touch is to both human development and survival.)

By studying videotaped interactions of mothers and daughters from a variety of income groups, I’ve been able to show how a young child can feel secure or insecure during the everyday routine of hair combing. In some instances mothers would laugh, invite the child to participate in the activity and praise the playful antics of the child’s pretend play. In these interactions, emotional skills were reinforced in the child that led to self-confidence and a strong gender identity, while laying the groundwork for healthy adult interpersonal relationships.

On the other hand, some children would be forced to sit stoically as their mother jerked the comb through their hair, their cringing faces reflecting the fear and pain they experienced. Perhaps the parents simply didn’t enjoy the task; or the hair elicited unconscious feelings of shame that begin during their childhood.

When I founded the Center for Natural Connections (CNC) at Tulane University in 2004, I hoped to promote the positive benefits of daily hair combing as an opportunity for parents to connect with their children, culture and community.

The CNC has translated findings from 15 years of research into cost-effective, community-based interventions. All the programs – which include Gentle Grooming for Hospitalized Children, Parent Café & Miranda’s Green Hair Puppet Show, and the Talk, Touch & Listen While Combing Hair parent support group – promote positive attitudes toward hair combing as an opportunity for caregivers to connect to their child.

The programs enhance parental self-efficacy, emotion recognition, conflict resolution and social support among parents. With seminars being held in community centers, it’s a psychologically safe place for parents of color to disrupt a legacy of trauma and create a new, positive narrative for future generations.

By recognizing the toxic stereotypes associated with their hair and skin color and learning from a community of fellow parents, African-American parents can begin to live out the African proverb “It takes village to raise a child.”

Dr. Marva Lewis is an Associate Professor at Tulane University with a Ph.D. in Sociocultural Psychology. She founded and directs the Early Connections Center for Reserch and Training. She developed the Talk, Touch and Listen While Combing Hair community-based parent support group focused on reunification of parents separated from their chidren due to incarceration or placement of the child into foster care. She has written, taught and developed tools to address issues of stereotypes and emotions associated with topics of diversity. Dr. Lewis was an invited speaker at the recent MI-AIMH conference held in May 2017.
Posts by Marva Lewis, PhD →