Relationship-based interventions, like infant mental health, target the caregiving relationship as a way to support infant attachment security and social-emotional development.  In theory, IMH therapists support reflective functioning when they provide developmental guidance, speak for the baby, remain curious about both parents’ and infants’ internal experiences and help parents reflect on and re-process experiences and emotions from their own childhood. As such, reflective functioning is an important construct in IMH research and practice.

Reflective functioning is the capacity to reflect upon internal experiences (thoughts, emotions and intentions) in self and others and to link these internal experiences with behaviors (Rosenblum, McDonough, Sameroff, & Muzik, 2008; Sharp & Fonagy, 2008; Slade, 2005).  A small body of research suggests that reflective functioning is the foundation for parenting sensitivity, which is associated with a variety of positive developmental outcomes, including 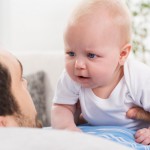 a secure attachment. Secure attachment, in turn, is related to prosocial behavior, emotion regulation, and psychosocial adjustment (for a review, see Thompson, 2008).  Interventions aimed at increasing reflective functioning, beginning as early as in pregnancy, are of interest to research and to clinicians utilizing infant mental health models.

All of our studies assess parental reflective functioning with a one-hour semi-structured interview that asks parents to reflect on their own and their children’s internal experiences. The interview is coded for parents’ use of mental state language (language about their children’s internal mental and feeling states such as the parent commenting on what she thinks her child is thinking or feeling), their ability to link mental states to behavior (such as the parent linking her perceptions of the child’s emotions, goals or intentions to the child’s behavior) and their curiosity to understand other’s minds (Slade, 2005). We are assessing reflective functioning in three studies.

Wayne County Baby Court. We are evaluating whether this collaborative approach is effective at improving safety, permanency and well-being.  Parent-infant dyads receiving Baby Court services work with an infant mental health clinician who is part of a collaborative team that includes the DHHS caseworker and the child’s attorney. The evaluation includes a pre- and post-test parent-child interaction task, a developmental assessment, a clinical interview to assess reflective functioning and parents’ report on their child’s social-emotional development.

The PuRPLE Study. We are testing the stability and change in reflective functioning in a subsample of mothers participating in a larger longitudinal study that assesses fetal brain development, parenting and child development across infancy. Our team has spent the last two years collecting data from women beginning during pregnancy and then again when the infant is seven months. We assess reflective functioning at both time points. Parents also complete a variety of self- report measures about mental health, stress, social support, temperament and parenting.  The dyad participates in the still-face procedure and we also test the infants’ development.

The MACY Study. This longitudinal study (PI: Muzik) followed mothers, with and without histories of child maltreatment, and their infants through the preschool period. The study sought to better understand how trauma shapes mental health, parenting representations, parenting behavior and subsequent child biology and attachment. The MACY team interviewed more than 100 mothers using the Parent Development Interview, which was coded by the team in the Early Relationships Lab. Some self-report data was collected via phone when the infant was four months. Dyads participated in home visits when the infant was 6 months, a lab visit at 15 months and mothers were interviewed by phone when the infant was 18 months.

Risk and Reflection. Our findings from the MACY study suggest that women who have a history of childhood maltreatment demonstrate a wide range of reflective functioning. Although most women in the study tended to have few demographic risks, for example most were married and college educated, the presence of a single demographic risk factor (low income, low level of education, young or single parent) was associated with lower reflective functioning scores. Contrary to our expectations, maternal reflective functioning was not related to experiencing maltreatment as a child, experiencing multiple types of maltreatment as a child, or having a depression or PTSD Diagnosis (Muzik, et al., 2015; Stacks, et al., 2014).

The PuRPLE Study is ongoing; however, preliminary findings suggest that mothers with balanced representations of their attachment relationships with their infants have higher prenatal reflective functioning scores than mothers with disengaged representations (Alismail, et al., 2015;).  Further, mothers who had more instances of being reflective throughout their prenatal interview used more attuned mind-minded comments during the still-face procedure, r = .51, p = .02, (Alrajhi, et al., 2015).

Alismail, F., Wong, K., Villa, A., Antilla, C., Beeghly, M., & Stacks, A. (2015, May).Maternal Attachment Representations of the Infant in the First Year of Life: The Influence of Prenatal Reflective Functioning and Depression.Poster presented at the biennial meeting of the Michigan Association for Infant Mental Health, Kalamazoo, MI.

Muzik, M., Stacks, A. M., Rosenblum, K. L., Huth-Bocks, A., &Beeghly, M. (2015, May).  The Effects of Trauma and Depression on Parenting Representations and Child Outcomes: Findings from the MACY Study. Workshop presented at the biennial meeting of the Michigan Association for Infant Mental Health, Kalamazoo, MI.