“In giving birth to our babies, we may find that we give birth to new possibilities within ourselves.”
– Myla and Jon Kabat-Zinn, Everyday Blessings: The Inner Work of Mindful Parenting, 2014

For many parents, pregnancy represents a time of reorganization that leads to psychosocial growth and the hope of new possibilities.  The coming of a new baby inspires shifts within the psychological worlds of the parents as their emotional ties to the infant begin to take shape. The development of these ties is critical because they are related to parents’ postnatal feelings about the baby (Vreeswijk, Maas, Rijk, & van Bakel, 2014), and they provide psychological fuel for the demanding work of postnatal infant care (Rapael-Leff, 2005).  Importantly, a parent’s prenatal thoughts and feelings about his or her infant are also associated with postnatal parenting behaviors (Dayton, Levendosky, Davidson & Bogat, 2010; Dubber, Reck, Muller & Gawlik, 2015; Hjelmstedt & Collins, 2008).  Just as the infant will ultimately develop an attachment to the parent, the parent develops a complementary caregiving system that provides motivation to protect and nurture the infant (Solomon & George, 1996), and this system comes online during pregnancy.

To date, the majority of the research informing our understanding of prenatal parent-infant relationship development has been with mothers (Slade, Cohen, Sadler & Miller, 2009).  More recently, prenatal bonding in fathers has also been the subject of research. Across studies, accumulating evidence suggests that: one, pregnancy represents the beginning of the parent-infant relationship for both women and men (Vreeswijk et al., 2014), and two, the quality of this relationship is related to postnatal parenting for both mothers and fathers (Dubber et al., 2015; Hjelmstedt & Collins, 2008). Focusing exclusively on mothers, D.W. Winnicott put it this way:

I suggest, as you know I do, and I suppose everyone agrees, that ordinarily the woman enters into a phase, a phase from which she ordinarily recovers in the weeks and months after the baby’s birth, in which to a large extent she is the baby and the baby is her. There is nothing mystical about this. After all, she was a baby once, and she has in her the memories of being a baby; she also has memories of being cared for, and these memories either help or hinder her in her own experiences as a mother.

In the IMH field we take Winnicott’s words to heart every day in our work with parents and infants; we talk to parents explicitly about their own child rearing histories, and we help them make conceptual links between past and present.  Indeed, attachment theory argues that a parent’s own relational history, described as “memories” by Winnicott and as “Ghosts” or “Angels” by more contemporary authors (Fraiberg, Adelson, & Shapiro, 1975; Lieberman, Padron, Van Horn, & Harris, 2005), is influential in the formation of the parent-infant relationship. Extensive research in the attachment field supports this link (Mayseless, 2006), and our clinical work with families reinforces its importance.

Pregnancy represents the first point in development when we have clinical access to the parent-infant relationship.  Therefore, whether we are working with expectant parents or helping parents reflect on their prior pregnancy and birth experiences, understanding the role of risk and resilience factors in pregnancy can extend the clinical window backward to the place where the parent-infant relationship first took shape.

Risk and Resilience in the Lives of Expectant Mothers

For women, pregnancy involves both physical and psychological processes that contribute to the deepening of the maternal-fetal bond over time (Yarcheski, Mahon, Yarcheski, Hanks, & Cannella, 2009; Slade, et al., 2009; Zeanah, Carr, & Wolk, 1990).  The quality of the mother’s physical health and psychological well-being during pregnancy is fundamentally tied to that of the fetus.  Prenatal risk factors that the mother is exposed to, therefore, have the potential to influence her own health, the health of the fetus and her psychological connection to her unborn baby.  Exposure to intimate partner violence (IPV), for example, increases the risk for infant mortality and morbidity (Sharps, Laughon, & Giangrande, 2007).  It also affects the mother’s psychological tie to the fetus.  IPV exposure during pregnancy is associated with less positive internal working models of the infant for mothers (Huth-Bocks, Levendosky, Theran, & Bogat, 2004), and is ultimately related to less sensitive early parenting behaviors (Dayton, Levendosky, Davidson & Bogat, 2010; Dayton, Huth-Bocks & Busuito, 2016).

Symptoms of psychological distress including depression, anxiety and post-traumatic stress disorder (PTSD) can also influence the maternal-fetal bond (Dayton, Hicks, Goletz, Brown, 2017; Luz, George, Vieux & Spitz, 2017).  Estimated rates of clinical depression during pregnancy range from 10% to 30% for mothers (Ashley, Harper, Arms-Chavez, & LoBello, 2016), and untreated depression is associated with less optimal maternal-fetal bonding (Yarcheski, et al., 2009; Alhusen, Gross, Hayat, Rose, & Sharps, 2012). It is important to note, however, that much of this work has been conducted with married or cohabitating Caucasian parents from middle-income socioeconomic groups (Yarcheski, et al., 2009). In light of the economic and racial health disparities in pregnancy and birth outcomes (Lu & Halfon, 2003), more research that extends this work to economically and racially diverse samples of parents is needed.

Protective factors for healthy and adaptive maternal-fetal bonding have also been identified. For instance, Yarcheski and colleagues (2009) conducted a meta-analytic review and found that, across many independent studies, increased levels of social support were associated with increases in the strength of the maternal-fetal bond.  From biological and psychological perspectives, this finding makes a lot of sense.  In relation to contextual stressors such as violence exposure, social connection has a countervailing influence on the human bio-behavioral regulatory system. Connection with trusted others is physically and psychologically calming and has important biological correlates such as lowering cortisol levels and initiating the release of oxytocin. These biological responses to social connection calm the nervous system and may thereby support the development of the maternal-fetal bond via increases in a mother’s sense of psychological and physical safety.

Findings from this body of literature have important translational implications for the early parenting field.  IMH interventions during pregnancy that help women free themselves from violent relationships, process and heal from the violence they have been exposed to, and decrease their symptoms of psychological distress are clearly indicated.  Further, and consistent with the central aims of many IMH programs, increasing a mother’s social support network may help promote a positive bond with her unborn baby, ultimately leading to more positive birth outcomes and a healthier postnatal mother-infant relationship. 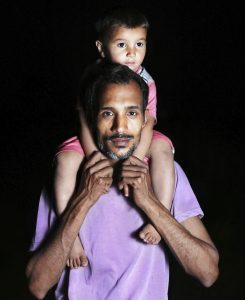 The meaning of fatherhood in the United States has changed in important ways over the past few decades (Lamb, 2010).  Men are now more actively involved in the daily lives of their children (Bianchi, 2011), and the importance of fathering to the social-emotional development of children is more frequently acknowledged (Lamb, 2010).  When fathers are involved very early in the lives of their children, they have the opportunity to form foundational and enduring relationships with them, and outcomes for mothers and babies are improved. The positive health effects associated with father involvement begin in pregnancy with improved prenatal, birth, and neonatal health outcomes and significantly lower per-infant healthcare costs (Alio, Salihu, Kornosky, Richman, & Marty, 2010; Salihu, Salemi, Nash, Chandler, Mbah, & Alio, 2013). In contrast, a lack of father involvement in pregnancy is associated with significantly higher infant mortality rates (Alio, Mbah, Kornosky, Wathington, Marty & Salihu, 2011).  Given these compelling findings, supporting the prenatal father-infant bond is an important target of intervention that has the potential to improve birth and relationship outcomes for fathers, mothers and infants.

Though less is known about the factors that affect the development of the prenatal father-infant bond, preliminary research suggests that psychological distress in fathers, including depression and anxiety, may be one risk factor for lower levels of prenatal bonding (Luz, George, Vieux & Spitz, 2017; Dayton, et al., 2016). Preliminary work also suggests that, on average, fathers may experience higher levels of emotional distance from their unborn babies, relative to mothers (Vreeswijk et al., 2014).  Much of this research has involved samples of middle-class, Caucasian fathers, however. As a result, less is known about how risk factors such as violence and poverty exposure may affect the developing father-infant relationship in pregnancy.

To address the relative paucity of prenatal studies of fathering in contexts of risk, ongoing research at the Motown Family Relationships laboratory located at Wayne State University’s Merrill Palmer Skillman Institute, is currently investigating prenatal relationship development in urban-dwelling fathers, with the goal of informing early interventions with fathers.  A central finding of this work is that a father’s belief in the importance of early fathering to the health and well-being of the infant is robustly associated with stronger prenatal bonding: Fathers who believe that early fathering is important tend to report experiencing stronger bonds with their unborn infants (Dayton, Hicks, Goletz, Brown, 2017). This is an important finding because fathers in low-income groups are exposed to social narratives that describe fathering primarily in economic terms, and poverty-exposed fathers are clearly disadvantaged in this respect. Furthermore, qualitative data from this study suggest that many fathers have a difficult time grasping their importance during infancy and tend to view their parenting role as more influential when their children are older (i.e., preschool aged and above) (Dayton, et al., 2016). Helping fathers understand the importance of their early relationship with their infant beginning in pregnancy can help shift the narrative from fathering as a mainly financial role to the importance of the early father-infant relationship in promoting the healthy development of the infant.

These cumulative findings have significant implications for IMH work with fathers and their families.  Most important, there is a need for early intervention protocols that communicate to fathers the centrality of the early father-infant relationship as a foundation on which the long-term parent-child relationship is built.  IMH practitioners are ideally positioned to engage fathers in clinical work and to help fathers negotiate the barriers that may prevent them from full involvement with their infants.  However, it is important to acknowledge that the vast majority of IMH workers are women. As women, our own histories have likely resulted in feelings and beliefs about the relative importance of fathers in the lives of infants and young children.  To authentically engage with fathers, therefore, we must examine our own feelings and challenge our own biases.  A mother-centric approach has dominated the IMH field since its inception.  Shifting our individual and collective views about early fathering will help move the field toward a more balanced family-centric approach and, ultimately, improve the lives of the families we care so deeply about.

Bianchi, S, M. (2011). Family change and time allocation in American families. The ANNALS of the American Academy of Political and Social Science, 638, 21-44.

Hjelmstedt, A., & Collins, A. (2008). Psychological functioning and predictors of father–infant relationship in IVF fathers and controls. Scandinavian Journal of Caring Sciences, 22(1), 72-78. Carolyn Dayton is an Associate Professor of Social Work at Wayne State University and is jointly appointed at the Merrill Palmer Skillman Institute for Child and Family Development where she serves as the Associate Director of the Infant Mental Health Program. She is a licensed practitioner of clinical social work and clinical psychology and is endorsed as an infant mental health mentor (Level IV; MI-AIMH) in the areas of clinical practice and research. Dr. Dayton's research is focused on early parenting processes with an emphasis on fathering in urban settings. She has over two decades of experience providing clinical interventions to the families of infants and young children in a wide range of settings including home-based, center-based and hospital programs. Dr. Dayton's program of research is fundamentally translational and transdisciplinary; it is informed by her clinical work with families and aims to identify biological and psychosocial risk and resilience factors that influence parenting processes and early child development.
Posts by Carolyn Dayton, PhD, LP, LMSW, IMH-E® →