Diversity and its Importance in Early Childhood

The concept of diversity takes various forms and is incorporated into many aspects of our life. From religion, gender, culture, family structures, and physical abilities, we are each brought into this world made up of many differences. For years we have thought that children will automatically form positive outlooks about the differences we each convey if we do not speak of those differences. However, research has shown that advocating and exposing children to diversity requires active promotion. Rodolfo Mendoza-Denton, a social psychologist at the University of California, says that we often think that young children are colorblind to differences, and we are hesitant to point out differences for fear that it promotes prejudice (Denton, 2011). However, numerous studies have shown that infants as young as 6 months are able to categorize people by both gender and race (Katz & Kofkin, 1997). By 2 years, toddlers use their recognition of race to reason about people’s behaviors. During toddlerhood, children notice and reason about differences, but studies also show that toddlers do not act on observed differences. However, by age 5, children express preferences for their own race (Kinzler & Spelke, 2011).  It is through daily interactions and observations of others’ comments and verbal and nonverbal behaviors that young children attribute particular meaning to race, culture and other forms of diversity.  By the late preschool years, such understandings inform behavior. 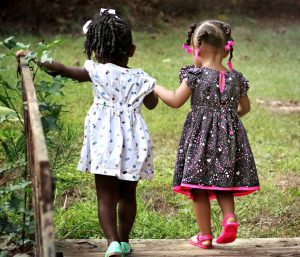 By ignoring young children’s attention to these differences, we as professionals unintentionally contribute to the prejudice and stereotypes that they gather from society.  In fact, young children’s racial beliefs are heavily influenced by their environments (Winkler, 2009). Silence about race doesn’t prevent children from noticing racial and other differences; instead, silence inhibits them from asking questions and having conversations about it. This is an especially important issue in classrooms lacking racial and ethnic diversity.

In less diverse environments, less exposure to diverse groups results in fewer conversations about diversity and, in turn, provides more room for prejudice. Wolpert states that we tend to assume that inclusion alone creates respect for differences. However, it is active conversation and support for children’s understanding of diversity that guards against the development of the stereotypes and prejudice that contribute to biased behavior (Wolpert, 1999). From the beginning of life, we all receive messages through television, computer games, music and books.

An anti-bias curriculum is an active process, using these outlets to foster exposure and later conversations about differences, diversity and, as the child develops, a sense of self.

What is Anti-bias Curriculum? What are the Goals?

According to the National Association for the Education of Young Children (NAEYC), an Anti-bias Curriculum is based on the educator’s deep belief in a system of justice and equality for all people, giving each child the opportunity for achievement. When implementing anti-biased approaches with infants and toddlers in mind, two of NAEYC’s goals stand out.  The first is that “Children express comfort within diversity, accurate language and caring human connections.” The second recognizes children’s emerging skills (with teachers’ support) in “recognizing unfairness and understand that it hurts.” Such skills become more evident during the preschool years as children begin to mature socially and emotionally and as they gain skills in perspective over time, but the roots of empathy are built in infancy and toddlerhood. In her book Start Seeing Diversity, Wolpert also outlines similar goals reinforcing the needs and importance for anti-bias curricula, one of which is to promote the child’s developing awareness of these differences and to help foster preschoolers’ empathic responses to others (Wolpert, 1999, p.13).

Effects on Children, Parents and Practitioners

How does an anti-bias curriculum affect relationships within these groups?   Secure relationships are typically characterized by respect, compassion, and awareness of self and other,  characteristics that are also consistent with anti-bias perspectives.  Secure relationships between teachers and children provide a trusting environment in which children are supported to grow and learn, including learning about similarities and differences in each other and in their communities.  For teachers, high-quality trusting relationships with colleagues and supervisors provide a safe environment in which teachers may feel empowered to become aware of their own implicit biases. In turn, awareness empowers us to notice when bias is informing our perceptions of and interactions with others and to take active steps to change our perceptions and interactions.   Of course, relationships are also important between parents and practitioners. Anti-bias curricula have a way of promoting these relationships by providing a welcoming sense to parents from diverse family structures and backgrounds. This allows for greater trust and communication between parents and professionals as they work toward supporting development for the child. An anti-bias system is a way of thinking that is translated by both parents’ and teachers’ actions and language.

Studies have shown that the parents of ethnic-minority children engage in racial socialization, defined by the American Psychological Association as the ways in which those parents teach their children how to navigate in a society that often presents racial inequalities and may associate them with negative stereotypes (Gaskin, 2015). These teachings also may include emphasizing the importance of one’s race and culture when it is not commonly or positively portrayed in society. Studies have found common themes in racial socialization to be teaching “cultural socialization, preparation for bias, promotion of mistrust egalitarianism and silence about race” (Strain, 2017). Often acts of racial socialization are not direct but may be subliminal messages that children receive from parents and extended family. Unfortunately, these messages may often include messages of bias and mistrust that children may begin to perceive about majority groups (Reynolds, 2017).

By incorporating anti-bias curricula, we as educators have opportunities to support children as they begin to see and embrace differences between themselves and others. Sadie Strain’s review on White Families and Socialization shows just how effective taking a colorblind approach has on the biases and assumptions of young children on diverse groups (Strain, 2017). By not talking about race to either ethnic-minority children or to those considered in the majority, we allow for development of negative assumptions, which are constantly influenced by the media. With the incorporation of anti-bias curricula in early childhood programs, we are able to combat these fears of mistrust stemming from both groups as they have opportunities to learn about each other.

Important Aspects in an Anti-Bias Curriculum

One of the most crucial aspects of developing an anti-bias curriculum is the self-awareness of the professionals. We all have our own internal, implicit biases and it is important to become aware of them and how we think because these biases influence our behaviors and teaching to others. As stated in NAEYC, incorporating anti-bias approaches in a program is less about adding physical diverse materials and more about the overall goal of promoting opportunities for everyone to be represented.

Self-awareness can often be difficult to achieve because we are already equipped with our own biases, stereotypes and assumptions (Derman-Sparks, 2015, p.14). For Diversity-Informed Practice, Shea and McCormick (2017) discuss how professionals need to take a step back and reflect on how systems of oppression such as racism, sexism, homophobia and classism have had affected their lives. We often create conscious — as well as unconscious — stereotypes about certain groups based on our past experiences. Chandra Ghosh-Ippen reminds us that we want to ask these questions of ourselves but also of others.  That is, we are encouraged to consider the histories of others that differ from our own experiences, including how differences in histories reflect significant differences in felt and lived experiences.  By taking and maintaining a stance of openness and reflectiveness about self and other, we are better positioned to curb our biases.  Professionals are encouraged to review the Program for Infant and Toddler Care (PITC) training on Ethnic Self-Awareness https://www.pitc.org/cs/pitclib/view/pitc_res/261.

Numerous studies have shown us how children as young as 6 months are able to recognize differences in characteristics such as race and hair texture. When incorporating an anti-bias curriculum, you can often learn what children are noticing through daily interactions with them. If you see that children are noticing differences in hair color, you may begin to introduce dolls that have various hair colors and textures. You may even incorporate experiences in the classroom that point out differences and similarities of children within the class, showing that you are all one community but have things about you that make you unique.

As you notice the children commenting on their differences, the way you respond to their awareness can have a substantial effect on how they view them. A big misconception is that pointing out differences is the same as racism. This is incorrect because there would need to be an awareness of a stereotype associated with the given race. In young children you can help form positive views by celebrating differences (Denton, 2011). Prejudice and stereotypes come from society teaching that certain groups are deemed “good” while other are seen as “bad.” For example, when children notice someone of another race, they often point out their skin tone. Embrace their awareness of differences and even give praise on the beauty of the individual they noticed. More important, you can point out to the child what the individual has to offer as opposed to focusing on their looks (Parents, 2018). This can be bringing attention to another language they may speak or even a culture they are a part of.

In the zero to three years, the goal of a diversity inclusive curriculum is to expose children to different categories of things they commonly encounter. For example, this may be exposure to toys representing foods found in different cultures in a pretend play area and eating foods from different cultures at mealtimes. Because the visual environment is such an important framework, educators should be sure to include images of the children and staff in their program along with their families. This can be a great example of showing different family dynamics while also instilling a sense of self in the child.

Around play areas teachers can provide images of various types of work showing a fair balance of men and women, as well as a balance of ethnic and racial groups (Derman-Sparks, 1989, p.12). Differently abled people and images of the elderly engaging in various activities should also be depicted. Books are another great incorporation as they can reflect different abilities, genders, and cultural backgrounds. Having a book in multiple languages gives good exposure to diverse populations as well. The goals of this curriculum can be implemented through different types of play, art materials and dolls as well. In their article Why Classroom Diversity Matters in Early Education, Reid and Kagan explain that because of funding, many early childhood education programs are often economically segregated. This results in an unintentional segregation of children by race and ethnicity as well (Reid and Kagan, 2015, p.5). These figures put an even greater importance on exposing and introducing children to diverse populations in these settings. The intention of incorporating an anti-bias curriculum is to promote overall education for all children, both those found in the majority and minority groups.

Mendoza-Denton, R. (2011). Should We Talk to Young Children About Race? Psychology Today. https://www.psychologytoday.com/us/blog/are-we-born-racist/201104/should-we-talk-young-children-about-race Chanel Miller is a graduate student in the Child Development Program at Michigan State University. She previously worked in early childcare settings, where her interest grew in examining child-caregiver interactions as they promote successful child development. Chanel is specifically interested in caregiver’s use of reflective language and culturally aware practices, as they effect the social-emotional development of ethnic-minority children.
Posts by Chanel Miller, BS →