Jacob was returned to his mother Kimberly’s care three days ago. They have had extended overnight visits for the past six weeks. This is my first visit since his return home. We met in the small living room draped off by a blanket in the doorway to keep in the heat from the space heater. Kimberly said the landlord promised he would be out later to fix the furnace that only sporadically puts out heat; she herself had thought of the idea to tie the window shut with rope to keep the cold air out. She sat on the small couch surrounded by large cardboard boxes filled with the things Jacob’s foster mother had packed up and sent with him when he came back home. Jacob ran between the boxes pulling things out—footie pajamas, bath toys, formula—and then throwing them across the room. Kimberly called his name, told him “calm down” and reached for him to come sit with her. Even at 28 months, his small body easily fit on her lap. He was diagnosed as “failure to thrive” as an infant and has remained in the lowest percentiles on the growth chart. Jacob cried and arched his back causing him to slip off his mother’s lap and down to the floor. I sat quietly observing them, holding the worries that have guided and directed our work together: “Is she ready?”, “Will he be ok?”, “Can they connect and thrive together?”

It has been almost two years exactly since he was taken from her. Failure to protect. Failure to thrive. Kimberly has worked hard to get here. She broke up with Jacob’s father, but promotes their continued supervised visits. She went back to school and earned a certificate that allowed her to get a full-time job. She got a place of her own. She has consistently participated in infant mental health (IMH) sessions; these were supervised by the relatives Jacob was placed with in his first and second placements and then at the agency after he was placed in a non-relative home because the relatives could not adequately protect him and promote his healthy development. Jacob’s health has been central to his foster care case from the beginning, and watching and worrying when he was not taken to the doctor or fed the correct foods was difficult for me as his IMH therapist. The foster care worker and I advocated for these concerns to be addressed by Jacob’s first foster parent, Kimberly’s father. This advocacy created strain within the family and between myself and the family, especially after the foster care worker threatened to remove Jacob from the home. Ultimately, this step was taken and several relationships were in jeopardy, including Jacob’s strong relationship with his grandfather.

During this time it was clear that Kimberly felt divided between her alliance with her father and her alliance with her son. Her own childhood history was defined by abuse and neglect from her mother, who Kimberly states she does not remember. She was removed from her mother’s care at age 3 after she was left home alone. After that, she was raised by her father and had no contact with her mother. He told Kimberly the whole story when she was 18, stating he thought she was old enough to know the truth and then make her own choice about whether to have a relationship with her mother. He said her mom had called him recently when she heard she had a grandson. Her dad said it would be ok with him if Kimberly wanted to meet her and talk. Kimberly said she thought it was too late for that, but said she is not angry with her mom. She says, “I know it’s hard to have a baby when you’re so young.” 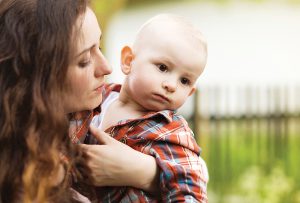 Hearing Kimberly’s story, I wonder about her own early attachments. Did her internal working model tell her she had to cry loud and long to be heard, or did she learn it was safer to keep quiet and act like she was wasn’t there? Maybe her fear of her mother made her stop and stare while also wishing she could run to her and be picked up. What did Kimberly learn from a father who knew she was being abused but didn’t remove her from the situation until she almost died? Is this the template that Jacob will carry, that you might not always be protected and maybe only saved in a crisis?

Ambivalent/resistant attachment was researched and defined by Mary Ainsworth as an insecure attachment style characterized by clinging and needy behavior when engaged with the caregiver, but then an inability to be soothed or calmed by this caregiver. She theorized that this inability to be soothed comes from the child’s lack of confidence in his caregiver’s ability to consistently and/or adequately respond to his needs based on his experience with this caregiver. The child also learns to heighten their emotions to ensure the caregiver will respond.

I have observed this pattern of heightened emotions and an inability to be soothed in this mother-son dyad. In the first few months of IMH visits when Jacob was 10 to 12 months old, he would crawl to Kimberly to be held, then almost immediately arch his back, start to cry and signal to get down. When his mother brought him in close for a kiss, he might bite her on the lips and face. When he got upset, he would scratch at his face, increasing his own distress and his mother’s concern for him as well as her feelings of helplessness.

In a previous article about ambivalent attachment for the Infant Crier, Kate Rosenblum cited research findings that parents of ambivalent/resistant children are often highly distressed and preoccupied themselves. She states, “In my own research I have found that parents who are preoccupied have a particularly difficult time responding to their infants’ needs when their infants are distressed. Infant distress, it seems, heightened their own distress, making it very hard to respond with sensitivity. When their infants cried, these mothers often responded with their own displays of distress, including intrusive, angry and hostile behavior. It was as if these infants and their mothers were caught up in a tangled dance of strong emotions.”

Kimberly has been observed responding to her son’s emotions by laughing at him or distancing herself by handing him over to others in the room. She would often tease him during play in early visits by holding out toys for him and then grabbing them away. As she and I have reflected together about these interactions, she has been able to wonder about Jacob’s feelings and open her perspective to his inner experience. We have wondered together about how her feelings and worries were responded to when she was a child. During Jacob’s relative foster care placement with his grandfather, I often wondered to myself if I was watching a replay of the level of care and attention Kimberly had received as a child. When concerns were raised about Jacob’s care from his grandfather, Kimberly defended her father and joined him in minimizing these concerns: “I was small too” and “He only throws up once in a while.”

During IMH visits at his grandfather’s home, Jacob would attend to his grandfather’s voice from another room and crawl away from his mother whenever grandfather walked in. Grandfather would laugh and say, “I don’t want you. Go see your mom,” and when he was handed to her, Jacob would reach up and hit Kimberly in the face. In the beginning this would cause mom and grandfather to laugh. They would often laugh at his antics, like when he crawled so fast his face hit the floor. He learned that he could get attention by acting in a certain way, by being “the entertainer.” This seemed to be another way Jacob learned to heighten his behavior to get attention.

Jacob’s placement in a non-relative home brought about a huge shift in the case. His nutritional and health issues were consistently addressed for the first time, and it was obvious from looking at him that he felt better. Jacob’s improved health allowed our work to have an increased focus on his inner world and the parent-child relationship. Kimberly mourned the loss of easy access to seeing Jacob now that he was not with relatives. However, her interactions seemed to reflect an increased appreciation of their time together. She was able to acknowledge feelings of jealousy and sadness over his relationship with his foster mother, who he called “Nana.” As time progressed, the foster mother became a sort of grandmother to Kimberly as well and offered her advice about helping Jacob calm down, eat his food and sleep better at night. Kimberly became more proactive in making and attending Jacob’s medical appointments. Parent-child interactions during visits became more complex and layered, building on earlier experiences and interactions. Their play together began to reflect the increased richness of their relationship as Jacob created scenarios of making food for himself and mommy.

Jacob still cries loudly, screams in frustration and throws objects when upset, but now instead of teasing, Kimberly calls him over for a hug; instead of laughing at him, she talks softly and instead of yelling “stop”, she holds him close. Kimberly is beginning to open the door a little bit to her feelings about her own early childhood, and addressing her unresolved trauma will be an ongoing therapeutic goal. Kimberly is overwhelmed with working full time and caring for Jacob as a single parent. I wonder how she will withstand the stress with limited support. I wonder how I would fare under these same circumstances. I still have those worries about this mother and son and how they will do together, but Jacob appears to be thriving and Kimberly is following up on his nutrition and doctor appointments. She looks at him with pride and he looks to her for comfort. They have consistent daily routines, they play and cuddle together, and his antics regularly cause her to laugh. I am so grateful for everything they have taught me about the power of early relationships, and I look forward to our continuing work together.

Jane Reitman has been an infant mental health therapist for 14 years working in community mental health - first at Development Centers, Inc. and now at The Guidance Center. She has been part of the Baby Court Project for the past two years and works with many families going through the child welfare system.
Posts by Jane Reitman, LMSW, IMH-E® (III) →